I finally finished part 3 of Lazy Sunday Mystery.  It took me a lot longer than I thought it would.  Perhaps if I didn't make 300 errors it would have been better.  I was listening to an audio book while I was sewing and was so very close to finishing it.  I was listening to The Eye of the World by Robert Jordan.  It is part of the Wheel of time series.  Anyway, I was very intently listening to the last two hours of the book and I realized a bit too late that I had sewn every single block the same.  So instead of two piles of 78, I had one pile of 156 all with the same orientation.  Luckily that was after sewing only one of the white squares on and not both.  But at this point I had already trimmed that corner and there was no saving my mistakes. This is my sad abandoned pile of squares.  The good news is that I can trim the ends off and end up with 2 1/2" half square triangles.  I think I am going to use these to make a pillow or pillowcase to match the quilt.

And to top that off after I cut 78 more rectangles and white squares I proceeded to sew another 20 or so wrong again.  But this time all I had to do was unstitch.  Sigh.  But I finished my book and it was amazing.  I already downloaded the second one and started that as well.  Do any of you listen to audiobooks while you sew? I also picked out fabrics for my next project.  I don't really need another but there is a quilt along over at Quilting Gallery that I really wanted to join.  It's called Aiming for Accuracy.  It looks like a fun quilt and I owe my son one since I am pretty sure my Lazy Sunday is going on my daughter's bed.  He picked out orange and blue and I am going to use black for the background.  There are a couple colors in there I might pull out but we will see how it goes.  I needed 24 fat quarters but most of these are half yard cuts.  I think I am going to duplicate some colors.  I have been collecting fabrics for a quilt for him for awhile and I don't want to buy any more.  Click the banner below if you want to check out the quilt along. 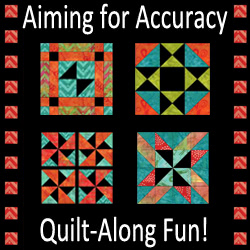 This week I am linking up to What a Hoot Quilts. 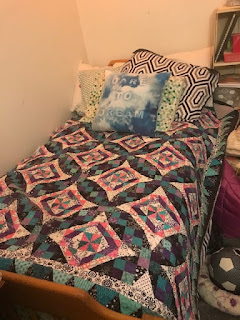